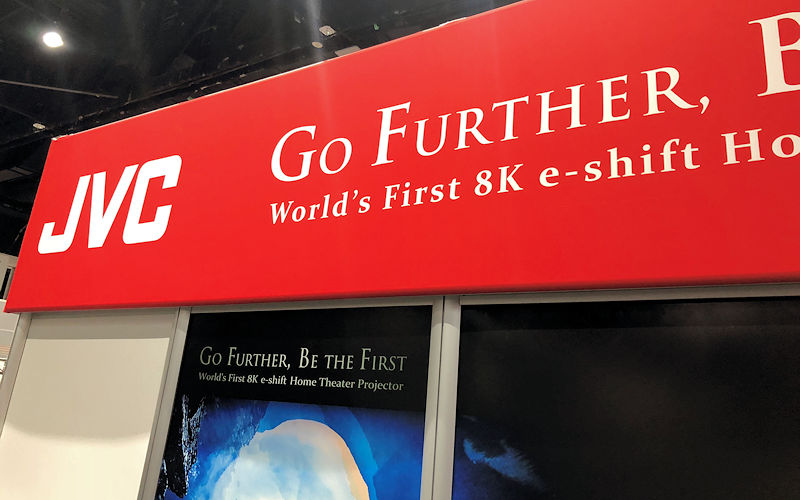 In 2016, JVC launched the highly acclaimed flagship DLA-RS4500 equipped with a 0.69-inch 4K D-ILA device. Since then, 4K content such as UHD Blu-ray, 4K streaming, and 4K broadcasting has become widely available.

The DLA-NX7/DLA-RS2000 and DLA-NX5/DLA-RS1000 are high quality native 4K models that deliver high contrast and excellent color in addition to 4K resolution for users who demand the best 4K quality for movie reproduction.

New Auto Tone Mapping function automatically adjusts settings for optimum HDR10 image
The HDR10 mastering information MaxCLL (Maximum Content Light Level) / MaxFALL (Maximum Frame Average Light Level) varies greatly depending on content. Therefore, in order to achieve the best HDR10 experience it is necessary to set the appropriate brightness settings for each piece of programming. The new Auto Tone Mapping function in the new projectors automatically adjusts settings based on the mastering information. Various HDR images with different brightness can be viewed optimally without manual adjustment of the settings. In cases where content does not contain mastering information, a fixed value will be set or it can be manually adjusted.

Bright, vibrant and dynamic imagery
A 265W ultra-high pressure mercury lamp and a highly efficient optical engine combine to deliver high brightness levels in every new JVC projector — 2,200 lm for the DLA-NX9/DLA-RS3000, 1,900 lm for the DLA-NX7/DLA-RS2000 and 1,800 lm for the DLA-NX5/DLA-RS1000. Image quality is further improved thanks to the new D-ILA device, which has narrow pixel gap and improved light efficiency to provide a smooth, powerful image.

Renewed Clear Motion Drive supporting 4K60P (4:4:4) signal
Clear Motion Drive is JVC’s original motion control technology that also supports a 4K60P (4:4:4) signal. The feature has been renewed for the new line to improve moving images more than ever. Together with Motion Enhance, which optimizes the driving of the D-ILA device according to image motion, motion blur is significantly reduced compared to conventional projectors.

Darren Ratcliffe
16:27 21 May 20
Noble audio and video is a great company with a great combination of hard-working and talented people and incredible technology options. Karl has done multiple commercial and residential jobs for me including a Sonos system, speakers for a home theater surround sound, and sound systems for a large office space. I highly recommend them…

Andrew Skaggs
16:24 13 May 20
Just got off the phone with Karl. I moved into a new home and we had an existing in home surround sound system in our wall. Karl was working on a job, but took the time to listen to my questions and provided me some DIY advice at no cost. He could have easily made it sound harder than it was and charged me to come out but instead gave me an honest answer and suggestions in order to try and come up with a solution. A little honesty goes a long way. I appreciated his time and help. I will be using them in the future when we upgrade systems.

Phil Branson
23:59 04 May 20
We had Noble AV complete some work for us in our new home and were very pleased with the outcome. They made sure we were satisfied when the job as finished and we appreciate that. We would highly recommend them.

Jill Dougherty
12:47 04 May 20
Karl and his team were great!! Our indoor/outdoor audio system is amazing! Karl was very thorough and went over all the details to make sure we were getting exactly what we wanted. We couldn't be happier with Noble Audio and would highly recommend them to anyone!

Oscar and Susan Medina
14:01 28 Feb 20
Such wonderful people to work with! Karl and Josh are very knowledgeable and care about getting it done to our specifications without comprimising the quality. Class act from start to finish!

Susan Medina
13:42 28 Feb 20
Such wonderful people to work with. Karl and Josh are both very knowledgeable. The quality and professionalism of their work is nothing short of excellence. Highly recommend as they are a class act from start to finish!

Brandon Workman
17:11 01 Oct 19
Noble Audio & Video ordered and installed 3 TV's for us. I can't say enough good things about this company. The products are exactly what we wanted and the installation went extremely well. Everything was as clean as it was before installation began, it was as if they were never there. The TV's look great, as requested, all wires are completely hidden and out of sight. Everyone I interacted with was extremely friendly, professional, and congenial. They provided very helpful suggestions and recommendations all while working within our vision. You can tell everyone in this company is concerned with your satisfaction as a customer. We will definitely be calling on them again when we get to our basement.

Jeff Smeltzer
21:30 18 Jul 19
Noble A/V did an outstanding job with our home automation issues and they were a delight to work with. Karl and his team have outstanding technical skills and explain everything to the customer. Noble provided us with a Nest Doorbell to help with our security. They also improved our home Wi-fi by installing wireless access points and backed up our devices with a network storage device. They also updated our home theater system with a network receiver and Blu-ray player. They also installed an OTA attic antenna to keep our cable bills lower! They solved all of our issues! Thank you Noble! I recommend them highly and I will not hesitate to call them when my next audio, video or network issue occurs.

James Karhohs
11:58 15 May 19
Fantastic experience!! The Noble team takes time to understand exactly what you want / need and explains how best to make that a reality. I’ve had other audio visual services (Geek Squad) attempting install and that was an awful experience. They flat out failed. Noble came in assessed the situation and in no time I had beautiful sound across our front & backyard. Tons of knowledge & experience very friendly and professional. Great experience. I would highly recommend Noble Audio for any installation. From a simple audio & video setup to a complex multi rack system this team has you covered!

brian zann
19:47 09 Apr 19
We have home audio projects that we are doing a little at a time and Noble AV was excellent guiding us how to proceed.

Alan Sheets
14:04 30 Mar 18
Aside from first contact latency (reason explained and understood) and an invoice miscommunication, I am pleased with the service provided by Noble AV (specifically, Joshua Ellis). Once Noble AV and I were in agreement to proceed with the project, I experienced the 'commitment to customer' which I expected from previous reviews. Installation occurred within three days of agreement. When complete, Joshua personally delivered my invoice after some confusion and took the time to explain my equipment while making some adjustments specific to my needs. I would recommend Noble AV for Indoor Audio/Visual installation and have begun talking about an outdoor lighting project as well.

Dave Smiley
16:51 09 Mar 17
These guys are THE best. Indoor and outdoor audio and video. Results amazing. Their costumer service is outstanding too!

David Moffatt
22:36 07 Mar 17
Awesome experience. They designed my home network and met with my home builder to determine what wiring and electrical needs the builder can do during the home build and what Noble Audio & Video can do after our home is built. This coordination with my builder will ensure that I have the proper home network now and in the future. Highly recommend Noble to design a home network either for your home being built or for your existing home.

Kevin Balog
16:18 04 Mar 17
What was most impressive to me was that after their installation, they sent me a professional looking diagram showing where all of my cables were hooked up. This may not sound like much but I have a fairly sophisticated system. I have filed that document away. If I ever had to try reconfiguring my system I wouldn't know where to start without this detailed document or calling Noble Audio & Video. Enthusiastically endorse. Professional and fair prices.
Next Reviews